It had to be an NRI 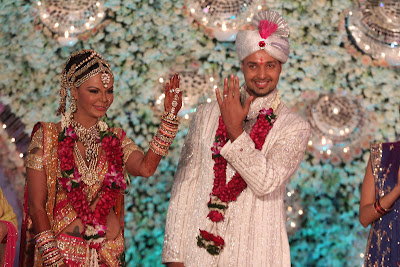 Madhuri Dixit did it.

Madhu Sapre did it.

Found an NRI/ phorener and rode into the sunset, I mean.

It's no surprise then that Rakhi picked Elesh from Canada as her future husband. The baby faced Manas and Chittiz (yuck what a name!) did not even look the part. Much less play it.

Elesh was the only one who said "I love you", with conviction.

The others were just acting, and Chittiz in particular was clearly not interested. Manas ki ma was hysterical throughout the finale - bete ye mujhe kahan le aaye ho. Laughing at all the wrong places and unable to say a single line to welcome her hone wali bahu. After all, her son is barely 22 years old...

OK - so the show was cheesy but well executed. Thank God there was no 'viewer poll' -- keeping in mind 'ek ladki ki zindagi ka sawaal' and all that.

And we do hope this *engagement* fructifies into a wedding nahin to Rakhi ki khair nahin! All of India sat up till 11 pm to 'bless her'. And confirm she would not wriggle out of it somehow. No 'kahani mein twist'.

I enjoyed the entire shindig, and whatever you say, the idea that a girl can choose her guy in this way is empowering. It's quite the opposite in the traditional arranged marriage where men still have the upper hand.

And there's no concept of wooing the bride, is there?

What Rakhi said about choosing Elesh was also interesting: "He came across as a genuine and caring person on and off camera".

Off camera is the important aspect. But in Rakhi's case then, do we believe the 'genuineness' she portrays on camera?

I liked the fact that even at the final stage - in the wedding outfit - she exposed a bit of cleavage and a lot of navel. "That's who I am, take it or leave it!"

Chalo, wishing Rakhi and Elace all the very best. I know there are lots of jokes about the impending divorce (if the marriage happens at all). But I think everybody deserves a chance and the happiest of couples are often the most unlikely ones.

And congratulations to NDTV Imagine for finally cracking the 'Hum aapke hain kaun' format which worked - for television.
Posted by Rashmi Bansal at 1:08:00 AM