You can guess which category Bombay Times belongs to. Long years of exposure to the paper have made readers immune but still. There are days like today, when one is compelled to stand up and salute this feather in the cap of frou frou. 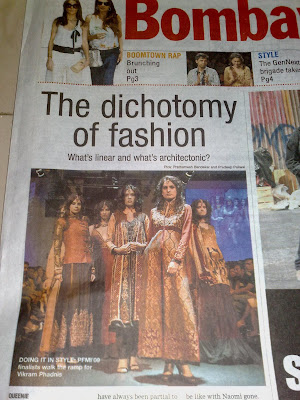 "Somebody once told me that in fashion there is a persistent dichotomy between linear, architectonic design and design with a much stronger narrative element."

Wonder how many BT readers get it - at all. Even the sub editor didn't, coz the strapline to the article is 'What's linear and what's architectonic?' (Well I don't really know but anyone who can read would at least figure the two are one and the same!)

Ms Queenie, who's written the article, obviously believes that fashion - which is generally considered frivolous - will be taken more seriously if she can dress it up with oh so intelligent adjectives. Alas.

Fashion is interesting.
Fashion is fun.
But Fashion Week is mostly irrelevant to our lives.

The 'architechtonic' aspect of fashion is to indicate the kinds of silhouettes, fabrics and colours we should be wearing in the next few months. The latest Bollywood hit/ Hindi soap will decide what's in as far as 'Indianwear' goes. And the stock from Bangkok/ Hong Kong which our hip stores live and die on, will determine the rest.

"You won't understand, my dear, it is an 'art form'".
Theek kaha aapne.

It's the art of making us believe that awfully constructed, impractical to wear clothes constitute fashion.

That models with unrealistic looks, expressions and proportions constitute womanhood.

That hacks like Ms Queenie who wreak havoc on the English language and leave you wondering 'what-was-that-I-just-read', constitute journalism. Even in its low, BT form. And I quote:

Besides a sip of champagne and a quite afternoon to see a friend in the city Naomi appeared 'perfect'.

Linearly architectonic, what say! I rest my case.

A previous article of mine on this subject: India Fashion Weak (Businessworld, May 2005).
Posted by Rashmi Bansal at 8:44:00 AM