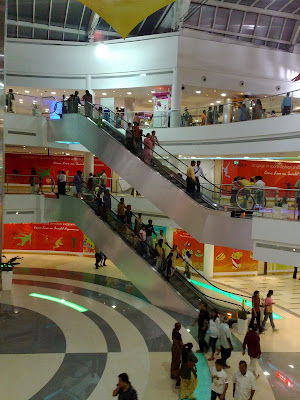 On a day when the stock markets tanked to a new low Nivedita and I paid a visit to the shiny new acres of air conditioned real estate in our neighbourhood. The just-opened In Orbit mall.

Five years ago Vashi was a mangrove swamp in terms of shopping and entertainment. A row of semi decent but essentially desi dukaans in Sector 17 and one so called multiplex theatre. Meghraj - which had only recently switched from wall fans to air condison.

Now we have five malls within 2 kms of my house. Which is three too many IMHO!

The revolution began with Center One. When Center One opened two years ago Vashi residents finally felt they had 'arrived'. Apart from Pantaloons and Food Bazar the mainstay of the mall was the very attractive and reasonably priced food court.

Next came Palm Beach Galleria. This time the attraction was the arrival of Adlabs - our first real multiplex. And to an extent the many branded clothing shops. Like I was really happy to see my old favourite Cottonworld - no need to visit Colaba or Phoenix Mills again.

But saath saath came City Centre right next door. Another mall with a multiplex (Cinemax) and a somewhat better food court than Palm Beach. Some interesting smaller shops and a Croma as well.

OK, by now hamari consumerist aatma triptho gayi thi. Magar earlier this year we got one more mall right next to the station - Raghuleela. Here the attraction was Fame multiplex and a bunch of Future group outlets (Central, Big Bazar and Food Bazar in the same building!).

There is also one decent theme restaurant called 'The Village' and a lallu (overpriced) food court.

Finally, we have In Orbit. Sabse aakhri entrant but yes, it's the new destination for the chalo ghoom kar aate hain types.

This mall has been 'under construction' for a long long time now. Even after the official opening vast portions remained unoccupied. But, quite understandably, they must be in a rush to catch the all-important Diwali shopper. With whatever goods they have! 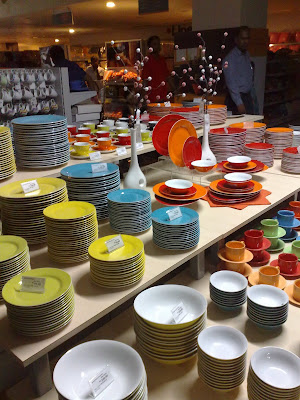 The main attraction here is definitely Hypercity. A store I had heard much about (especially in the context of kitchen knives) but never visited. And I must say it is indeed outstanding. There is so much SPACE. Attractive display and AND value pricing.

The exact opposite of the Kishore Biyani model of 'we strive hard to remind you of a kirana store'!

The interesting thing is how the mall has evolved. When Center One came we were just grateful to have a mall, any mall. It looked and felt fantastic!

With tenants like Food Bazaar and the sasta sundar tikau food courts junta felt haan, yeh theek hai. Mere matlab ka hai. It gently broke us in to the whole idea of shopping in malls.

The next malls were bigger and better in terms of space. Glitzier in decor and sold more premium brands. They got us used to the idea of paying Rs 150 for movie tickets + 60 bucks for popcorn (good old Meghraj charged only Rs 10!).

Then along comes In Orbit. So huge in size it can swallow the whole of New Bombay on a weekend. So vast you get tired gawking at the windows on a single floor.

The kind of place where you feel - for a couple of hours - that you are actually living in the First World...

When I studied marketing we were taught about the 'first mover' advantage. But I am not sure there is any such thing in many categories, anymore. One guy educates the consumer, changes his behaviour, creates the market. Another then swoops in and picks up that customer with the promise of 'something bigger and better'.

Or just something new and therefore different.

You know how discos operate? Average life of six months to one year, then something cooler comes along. Well, it's looking like that with malls.

Of course each mall eventually develops its own personality and set of customers but there should be enough people to go around!

Even my nine year old daughter can see there is something stupid about five giant malls in a locality like New Bombay where people are well-off but (mostly) not the kind who sleep on matresses stuffed with ill-earned cash.

"Mummy when Center One opened remember the rush?"

"Now there won't be rush anywhere.. all will be 'medium'".

The question is, will 'medium' footfalls be enough to sustain all these shops?

Not that it matters anymore. Since the debacle at Wall Street I guess failed mall owners can just turn around and say - "Yeh to kuch bhi nahin hai... Bhool-chook-galti maaf!"
Posted by Rashmi Bansal at 12:39:00 AM

Email ThisBlogThis!Share to TwitterShare to FacebookShare to Pinterest
Labels: In Orbit, New Bombay