The Long March to Tibet 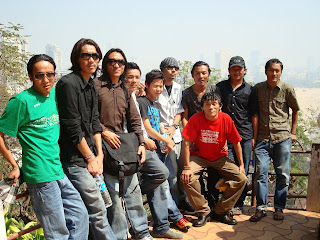 We are standing outside the 37th Esplanade court in Mumbai. They seem so out of place, these young boys with their hair gelled back and bright 'Free Tibet' t shirts. The court clerk had difficulty reading out the names.

They are Indian in a sense, and yet 'foreigner'.

So what is their offence, anyways, I ask. Dorji takes it upon himeself to explain. He is the de facto 'leader' of the gang and speaks on their behalf. And on behalf of all Tibetan people.

There is so much passion, so much pain in the struggle these young men have undertaken, that you cannot help being moved. Here is the story, in their own words:

"My name is Dorji, I am studying in MS University Baroda. On 26th November 2006 we gathered here, around 50 Tibetan students from Baroda, few from Pune and Bangalore, to protest against the Chinese leader Hu Jintao who had come to Mumbai, at the Taj hotel.

We came here specially to protest against him as he was in charge of the Tibetan Autonomous region in 1989. There was a huge protest at that time for independence and he imposed martial law. Thousands of Tibetan people were killed .. and he was promoted as President after a few years.

So we wanted to convey our message that he is the killer of Tibetan people. In September of that year 70 Tibetan people were shot down while crossing the border at Nangpala in Nepal. The Chinese claimed the reason was security but no Tibetans had weapons at that time. These are violations of human rights... we would like to be a voice for those without a voice in Tibet.

I don't know how much we helped the Tibetans. But it was a satisfaction that we are doing something. We have not forgotten even after 50 years have passed. And to convey mesaage to the Chinese that we won't stop... whatever they do we will continue until Tibet is free.

So we protested. One of our friends from Bangalore - President of Bangalore Tibetan Students -he burnt himself to get attraction of media, to let them know more. All Bombay newspapers covered the protest. His leg was fully burnt, he was in hospital for 2 months. So there is a case against us by the government. And because he tried to commit suicide, the case becomes serious. We have been coming to court for 2 years every 2-3 months.. We don't know how far it will go."

But, I ask, you were born and brought up in India and have never visited Tibet. 50 years have passed but you are still hopeful that something will change? By burning your leg you got publicity for 1 day... but day after day it's v difficult to carry on this struggle. What keeps you going?

"Feeling of refugee will only be known by a refugee. We born here, but this is not our home.. although this is our home. His Holiness Dalai Lama once said we feel more Indian than Tibetan. I also feel.. I like everything Indian, Hindi films, I love Indian food but still there is something inside I can't explain.

Our parents have told us what's it like in Tibet. And we live in a group we went to school together, we are brought up in Tibetan culture. Inside... we feel Tibetan.

We are not fighting for ourselves ..We have everything in India. Good standard of education, good standard of life. We are fighting for those who are under Chinese. If they are unhappy life has no meaning for us. Main thing is Security for everyone and those Tibetans who are dying, who are political prisoners... what about them.

There are a lot of prisons in Tibet. In Lhasa - everywhere there is a brothel, there is a bar. They are exploiting our race, they want to finish off our race and these things make us continue our struggle."

Even if it takes another 50 years, the next generation and and next generation after that? The struggle started in 1959 and now it is 2008. How long will it take and will you continue however long it takes?

And you are not concerned about your career and having fun, like other people of your age?

"These things come second. We are studying but this is second. First thing is our struggle to show we still exist, as a race. If we lose our identity, there is nothing.

They are resettling Chinese people in Tibet area. We also have a lot of uranium. And Tibet is the roof of the world, the source of water for millions of people. They are taking our resources and exploiting them, like the British did to India."

Have you met the Dalai Lama?
"Yes, many times."

I turn to Lhakpa, the boy who had set fire to his leg. Two years later he is fully healed. At least from the outside...

When you burnt your leg, was it a spur of the moment decision or all carefully planned?

"I planned only 1 day before," he explains in halting English. "When I came from Bangalore I thought 200-300 Tibetans will come and we will have a big protest. But police had already warned all the Tibetans selling sweaters here that if you take part we will not let you do business. So they did not join us.

So out of a feeling of desperation I did this, I set fire to myself."

So how did it feel... do you think you achieved your goal?

"This is only a small thing for me. Just my leg was burnt, But inside Tibet thousands are dying, hundereds are suffering in prisons they are being tortured with electric shocks, some iron is being put in women's vagina.. compared to these things my suffering is nothing".

Have you ever been to Tibet?

"I came from Tibet in 1993. I want to add that our strufgle will not end. Now we qare planning to go back to Tibet on March 10. The Chinese government is always telling Tibetans living outside to return.. We want to test that how will they treat us if we return.

Our plan is to go to Tibet, 500-600 of us. We will march back to Tibet by road, it will take 8 months. We will start from Himachal Pradesh, Dharamsala and go thru Nathu la pass. We will surrender our Indian identity cards to the govt, thank Indian govt. We may die, we may not die I don't know but that is our plan.

So no more hearings over here.. If things not ok there we will struggle and die there. We will fight for freedom that is our main objective".

I ask Dorji if he too will be going. He answers in the negative, he has exams...

He adds hastily,"All of us can't go back at the same time. 5 NGOs - Tibetan Youth Congress, Tibetan Students Association and some others have gotten together for this. 10 March 1959 is considered Tibetan Independence day by us. Every year we commemorate the day, this year we are planning this return...

This is first trip, if it succeeds we will continue. But we can't predict what happens. Those who are going will sacrifice everything.."

For 50 years the struggle has remained peaceful. But you can see patience is running thin now.. You can see it in the eyes of these young men.

"It is because of Dalai Lama, we are all following him. The Chinese government is waiting for his death".

"Buddhist philosophy is against violence. That's why we have stayed like this, 50 years. But I am not a Buddha... Non violence does not mean you cannot defend".

But errorism is not 'self defence'....

"What Bhagat Singh did? He killed the General, he did not kill civilians. So we may attack those who directly killed Tibetans... Not saying we will do but it may happen. The young generation is getting tired. We are losing our Tibetan culture staying outside our country for so many years..."

And yet they go to sleep every night, dreaming of free Tibet. Or at the very least an 'autonomous region' in the true sense - where Tibetans come first.

Today is the 10th of March. I call Dorji to ask him about Lhakpa. Is he really going back to Tibet?

"Yes, they are going...I don't know how many of them.. but they are leaving today, that's for sure."

And someday I hope to visit Lhasa and share another cup of tea with that young man. A young man whose leg may have healed but whose heart will remain on fire. As long as his country and his people burn for freedom.

If we in India had even a fraction of that passion for a country which is already free, now that would be something!
Posted by Rashmi Bansal at 11:23:00 PM