Yup, you no longer have to sing, dance, tell jokes, answer GK questions or even perform mindless tasks on TV to earn cash. All you have to do is convince the nation that your kahani is more dukhbhari than the two other contestants. Get enough sms votes, Rs 5 lakhs is yours!

Standard Chartered 'Kisko Milega Cash' is a new daily show on Star One. Tonight's episode featured one Good Samaritan who is supporting his rakhi sister and wants to use the money to buy a house for her. One Close-to-Tears-All-The-Time young lady who wants to buy her parents a house because ek din meri shaadi ho jayegi aur phir unka kya hoga. And a third gentleman whose story I missed but who looked dukhi as hell.

Each contestants pleads the merits of his/ her case for 60 seconds. Then an a/v is screened where all their friends and relatives talk about how selfless, helpful and needy the person is. The 'opinionmakers' (Neena Gupta, Jaya Bhattacharjee and Anil Dharker) mildly quiz them.

Two out of three in the expert panel say they're not very convinced that any of the three are truly that needy or deserving (neither am I). But based on audience votes, one will get the paanch lakh ka cheque. And the premium rates charged for those smses will partly fund the prize won't it? Yeh to hua ek bheekh maangne ka naya, hi tech tareeka!
Star One can look forward to a LOOOOOONG line outside its office to participate. And the show just might catch on. Not with the kind of people who read or write blogs but what the channels like to call 'janta Janardhan'.

Speaking of which Ramayan seems to hit the sweet spot with the public. I guess we Indians can never tire of the story, no matter how slowly it unfolds. In fact, slower the better because unlike saas bahu serials you can't mess with the storyline - randdomly kill off characters, wipe out their memory etc.

My initial impression of Ramayan was that the only update to the 80s version was more make up and more faux gold ornaments. But when I tuned in yesterday after many weeks I realised it's a little more than that...

Bharat is asking bhraata Ram: "Mujhe kaise pata chalega ki mujhe pyaar ho gaya hai?" And Shri Ram replies:"Jab tumhara dil tumhara hote hue bhi paraya lagne lage." Or something to that effect. And he proceeds to give a long lecture on the merits of 'love'. How it is divine and natural and wonderful.

Of course he has already won Sita in the swayamvar by this time. But still. Duty, sacrifice, good son, good husband/ wife, good brother are the words you associate with Ramayan (the Valmiki version). The Sagar version is adding some whole new dimensions... 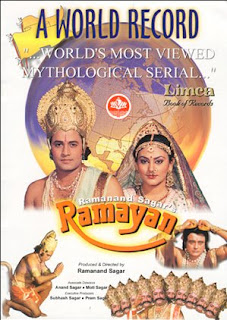 And another 'update' on the 80s Ramayan - a small thing but I find it interesting. In the original series Ram, played by Arun Govil had a red tilak and cropped hair. In the new version Ram has shoulder length hair and sports a sun-shaped bindi (signifying his suryavanshi origins).

In the 80s any Indian man with long hair (except for a sadhu) was labelled a delinquent. Parents would cry and beg, "Please cut it!". Now, you see long haired young (and even middle aged!) men all over the place. I guess it was Dhoni who made it fully mainstream and acceptable. (although he subsequently went and chopped it all off).

But hey, in case your parents still have a problem just tune into Ramayan and remind them,"Yeh fashion nahin, bhartiya sanskritik tradition hai."

Lastly, the amount they smile on the show. The pull of religion is strong but so is the need to bask in the glow of shiny, happy people. So what if they existed thousands of years ago...

A welcome escape from the daggers and knives being thrown by devranis and jethanis in homes, and on rival channels!
Posted by Rashmi Bansal at 11:45:00 PM