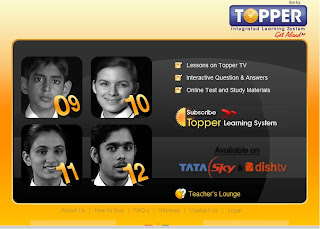 It is decades since I myself gave a Board exam but here's what I felt after watching it over an hour or so.

The chemistry class 12 episode featured covalent bonds, amorphous and metallic crystals and so on. Most of the lesson consisted of the teacher reading out the TV version of a powerpoint slide. To prevent students from falling asleep he had worn a
bright red shirt and some fancy graphics jump across the screen from time to time.

The 'Exam Special' on polynomials and quadratic equations was a little better. A lady in pink salwar kameez (Priya Venkatraman) was the presenter. The speed at which sums were being solved was a little fast (those in the thick of it may feel differently!).

The helpful part was the constant references to what Qs were likely to appear and tips on how to write your answers (eg include steps as there are marks for steps).

However it all seemed quite far removed from Greycells18 co-founder Sricharan Iyengar's assertion that 'Topper' would feature a group of 'star teachers' who have been carefully identified.

With exceptional track records - iconic and inspirational – these individuals come armed with experience gathered from teaching in the best institutes of the world, coupled with a passion for their subject. This team will present modules to students in the simplest manner.

Yes, the "educators" of the channel include Chandralekha Singh, PhD from University of California, currently teaching at Pittsburg University; Shankar Venkatagiri, Phd from Georgia Tech, currently teaching at IIM Bangalore; and so on. But I can't help think that it might be better to get famous coaching class teachers instead. Because they have far more passion, enthusiasm and a more individual style.

Topper TV is free to air till April 15. There is also a website with online tests and an 'ask the expert' feature. The TV + website package is being called an "Integrated Learning System". I guess students would be asked to pay in various ways, in due time.

Topper TV can't replace the traditional coaching class model and for that reason I see the website being more useful than the TV version. The average student would attend school, then go for classes, come home, eat, and put on the TV to relax a bit. Not watch sums being solved...

But who knows. Maybe the point is like joining a gym. You do it but don't necessarily work out everyday. Parents will make all kinds of investments in the interest of educating their kids.If all the neighbours have a subscription, dijiye humein bhi!

And TV has such huge reach - so it makes sense vs an only-internet offering. Can't recall the name of the company but there was precisely such a dotcom in 1999-2000. Now defunct, of course!

As for me, I will switch to Topper TV anytime I have difficulty falling asleep :)
Posted by Rashmi Bansal at 2:42:00 PM