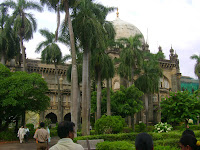 Sunday afternoons can be spent in many ways. A visit to the Chhatrapati Maharaj Vastu Sangrahalaya (formerly known as Prince of Wales museum) should not be one of them.

I have a dim memory of visiting the museum in class 2. Kids in uniform and ribboned up chotis walking along in single file. No idea what I saw but I remember the feeling "never again!"

Not much has changed. As an adult I can see there are some spectacular examples of Gandhara art. And a lot of other neaty displayed items of historical and cultural significance. But 15 minutes after entering I am exhausted and listless.

Is it the gloomy lighting, the lack of air conditioning or most importantly, the question,"How does this all matter?"

The classification of things has clearly been made from an academic's viewpoint. There's little or no attempt to excite the ordinary visitor.

You can hire an 'audio guide', of course. This guide comes free with the ticket for foreigners (who pay Rs 300). While Indians who get in on payment of Rs 15 must pay Rs 200 separately.

But that's besides the point.

All great museums are places which showcase the past, but make it come alive. Living monuments like an Aamer fort or Versailles palace of course, have it easier than museums which collect and display stuff from all. That's because you close your eyes and almost feel what it might have been like to be a king 400 years ago. Whereas a musuem only gives you the bits and pieces.

Then again when you enter va great museum there is a sense of grandeur. The British Museum , for example. On a 2 month internship in London I visited and fell in love with it. Of course I knew that many of the exhibits had been plundered and brought back to Britain. Which is why I felt no guilt about not making a voluntary donation which visitors are encouraged to make. (There is no official entry fee).

Another problem with the Prince of Wales museum: there is no Star Exhibit. That one thing everyone has heard of and has to see. The Louvre has the Mona Lisa, the Egyptian Museum 'Tutankhamen'. Yahan yeh bhi hai, woh bhi hai koi Shahrukh Khan nahin.

Agreed, all museums don't have the funding or a 'loot lo and add to your collection' advantage. But surely an effort can be made to connect with the aam junta. Nehru Science Centre for example, is no match to any really great science exhibit in the world. It could be far better maintained and much more innovative. But they are at least trying.

The Victorial Memorial in Kolkata is another fine example. Their exhibit on the 'History of Calcutta' is amazingly and interestingly put together. No wonder it attracts the maximum crowd. However, discount some of it. This is the only section which boasts of air conditioning :) 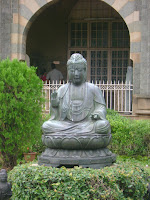 Lastly, museums are perhaps the shauk of advanced civilisations. Or the final resting place of dead ones. The Egyptian Museum in Cairo showcases a lost culture about which there is constant curiosity value. The things you see in Prince of Wales are not that strange or unknown. Sure, that Buddha statue or miniature painting may be 1000 years old but a similar (knock off version) might very well exist in your home.


Our culture is a living and breathing culture. Unfortunately the museum is suffocating.
Posted by Rashmi Bansal at 4:19:00 PM

Email ThisBlogThis!Share to TwitterShare to FacebookShare to Pinterest
Labels: Mumbai