Heard a song on the radio the other day. Thought it was pretty cool and idly wondered who the singer might be.

Then I catch the same song on TV and ... shudder. It's Abhijeet 'Indian Idol' Sawant. Full marks for earnest effort. Zero for guy-who-sings-whom-girls-swoon-over. Apna Ahijeet, boy next door, does not make a convincing singer of soulful ballads. Yes, the 'brand' does matter. Ears aren't impartial, they take a cue from the eyes.

A recent study in the US revealed that food in McDonald's wrappers tasted better to kids.

McDonald's-labeled samples were the clear favorites. French fries were the biggest winner; almost 77 percent said the labeled fries tasted best while only 13 percent preferred the others.

Surprisingly, 54% preferred McDonald's-wrapped carrots versus 23 % who liked the plain-wrapped sample. If I were McDonalds I might just add a stalk or two of salad or fresh fruit and offer a 'Healthy Happy Meal'. More attracive to parents!

The bottomline is branding is everywhere, and it's almost everything. Sure, many of us now buy generic products for the cost saving but in that case we put our trust in the store or retailer selling the item. "Usne rakha hai to theek hi hoga". 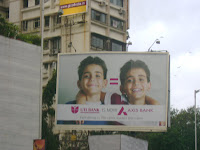 Which brings me to the curious case of Axis bank. The renaming exercise of UTI Bank looms large on the Mumbai skyline these days. "Everything is same except for the name" explains the hoarding, featuring two identical twins.

I couldn't for the life of me understand the logic behind the campaign. I mean the name was a huge part of the attraction of UTI Bank - 'UTI' being embedded in the public consciousness as a trustoworthy institution. Despite the sad state US64 was eventually reduced to.

IDBI Bank, ICICI Bank, HDFC Bank, UTI Bank - all three had this mix of 'we are old, but we are new' kind of image. Of course ICICI and HDFC are way ahead of the other two in many respects. The UTI branch I visited a couple of years ago was so public sectorish I decided against opening an account even though the location was ultra convenient.

If it really had to change I would have hoped other things would be tackled. The name was not really a problem!

Then I read this piece in Mint and discovered why someone would go to all this trouble. They didn't have a choice...

The bank had to change the name before a January 2008 deadline; that’s till when it had the rights to use the brand name of its erstwhile parent, the Unit Trust of India. UTI Bank was hived off from UTI in 2002.

“The last time a bank actually changed its name in circumstances that did not involve a merger or a takeover was in 1955 when Imperial Bank was renamed State Bank of India,” says Hemant Kaul, head, retail banking, Axis Bank.

A senior executive from a media-buying firm estimates ad spends for the name-change campaign to be in the region of Rs10 crore. Then there’s the cost involved in changing signages at 580 branches and 2,157 ATMs.

The new name, experts say, will help the bank shed its unintended association with public sector banks and also give it an modern, global feel that could appeal to younger consumers.

I'm afraid the word 'axis' was hardly the most modern or global choice. The bank chairman, P J Nayak, is apparently a mathematics buff and just might have used head over heart when it came to name selection. Although even the head bit might have been exercised more. Looking at the problems...

For example, they did not anticipate how difficult it would be to write a word like 'Axis' in 17 different languages. It took quite a while to get the maatras right.

Ah, the pleasure and the pain of branding!
Posted by Rashmi Bansal at 2:22:00 PM

Email ThisBlogThis!Share to TwitterShare to FacebookShare to Pinterest
Labels: advertising