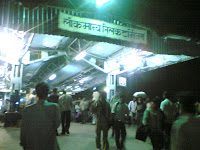 ......not in distant UP or Bihar but at our very own Kurla train terminus. I was there last night, to pick up my mom, returning from Kanpur on the Lucknow Express. Suffice it to say I felt transported to Mulayam Singh country standing in Mumbai itself.

Now of course large swathes of this city are not 'first world' at all. Or even second world (if something like that exists). But when it comes to a public amenity such as a railway station in a major metro, there are certain minimum standards you expect.

CST, Bombay Central, even Dadar - they're not fancy but they're fairly functional. A station like CST was built over a hundred years ago and there's scarcely any room for expansion. Yet the local and through train terminus somehow co-exist and bear enormous passenger loads.

By contrast, Kurla terminus is exclusively for long-distance trains. It was built from scratch but God knows which planner/ architect was employed by the railways for the job. Its existence almost justifies 250 years of British rule in India. Had they not been here, perhaps the rest of our stations too would look like tabelas.

The first problem with Kurla terminus is that it is in the middle of nowhere. Meaning not enough signage - whichever side you approach it from. But that is nothing - wait till you actually get there.

You will somehow have to squeeze past the taxis and rickshaws piled up at the narrow exit-cum-entrance to park your car. A vast ubad khabad maidan with piles of rubbish where rats the size of 2 week old kittens stroll languidly. A housing complex for the upwardly mobile of said species complete with picturesque garbage dump and 'tracks' view! 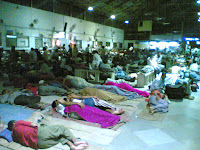 Enter the station 'complex' which is basically a couple of platforms under tin roof sheds and a large cement and concrete hall. A kind of 'waiting area' where rows upon rows of sheet clad bodies are laid out in various stages of slumber. Waiting for a train? Or simply waiting it out till they find accomodation in Mumbai. You can't really tell.

Onto the platform. The stench hits you, full on. A giant unwashed and uncared for smell; a lone uniformed employee valiantly spraying the tracks with pressurised water. Standing there in a pool of self-created sludge. 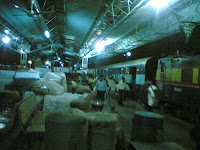 The already-narrow platform is half occupied with giant gunny bags barely leaving room for alighting passengers. Two trains pull in at around the same time - both over 2 hour late. There is absolute chaos as a mass of humanity spills out of the station and tumbles into the waiting tangle of transport. No traffic policeman in sight...

The first taste of Mumbai for folks from the hinterland. The dirt, dust, chaos and lack of amenities perhaps make them feel right at home! 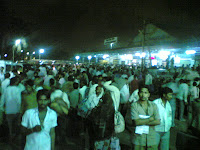 I entered the stationmaster's office with the intention of writing a complaint/ suggestion. Can't the railways at least level the ground outside the station to provide proper parking? I mean, you're charging us for it!

A tired middle aged man looked up and,"Madam, kya karein.. sab unplanned hai. Naya building banega." Kab? I was last at Kurla terminus 6 years ago and nothing has changed in the interim period. A tiny rat scampered across his room as we were having this conversation. Simultaneously the train we were expecting pulled into the station and I abort my 'improve India' mission. Just glad to pick up mom and head home!

The thing is...
Building clean, functional railway stations is not rocket science. There's the Delhi metro of course but also just a few kms from Kurla, the example of New Bombay. Vashi, Belapur and the like. They're 'local' of course, but living proof of stations built to some kind of plan. And an improvement on the British zamaane ka model - with better design, construction quality and hygiene standards.

You keep clean, it stays clean. You build a cowshed, it stays that way. And gets worse...

But then Shree Laloo Prasad is too busy giving lectures at IIM A and Harvard to bother about such minor irritants. And the media - so full of discussion and debate on the need for a second airport in Mumbai - could hardly care less.

At the very least they should stop calling this horror 'Lokmanya Tilak' train terminus. Now that, would be a real sign of respect.

P.S. I am leaning towards Nokia N80 as my next phone. Does it take decent night shots? Any N80 owners with views/ opinions - please do get in touch!
Posted by Rashmi Bansal at 3:28:00 PM