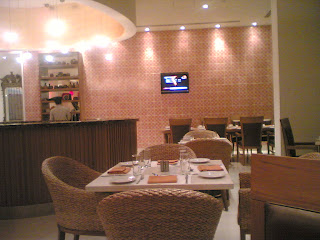 We may not have 24 hour electricity, but we finally have a fancy shmancy hotel. It's a 4 star wonly but The Park is, in some ways, even more pseud than your regular 5 stars. Being a 'boutique' hotel they take extra care to have exotic items on their menu. The desssert choices, for example, include 'yoghurt jello with berry phyllo' (eggless and dietic). Go figure!

OK, it's not like New Bombay has no hotels. But there aren't any of the kind you might want to visit because there's 'something in the air'... that la di dah crowd, precise geometry of spoons and ceiling-to-sky lobby which makes you want to linger over a 200 buck coffee.

So anyways, having heard of this new 'Park' in our part of the world we were excited enough to get all dressed up and go check it out a couple of days ago. Having noted it was in 'Sector 10, CBD Belapur' we zipped down Palm Beach Road and thought it would be pretty simple locating it once we were in the general vicinity.

Were we mistaken! CBD or 'Central Business District' Belapur isn't a place you want to be stuck at late in the night, looking for directions. There is no one - except for security guards - for miles and miles. And all these guards shrug helplessly, "hum idhar naya hai". Fresh Off the Bhagalpur express...

After circling around aimlessly we figured it must be on the other side of the tracks. As the description I accessed via GPRS read promised 'stunning views of hills and lush green foliage'. Uh, right. Not in this season.

We checked out the 'signature restaurant' Aqua, set against a pool designed more as a backdrop-to-a-party than for any serious swimming. Very pretty. But the menu, which was supposed to be Continental + Mexican seemed a tad too imaginative. Perhaps that was the brief given to the chef. Confuse the hell out of your customers. They won't think twice about the prices. 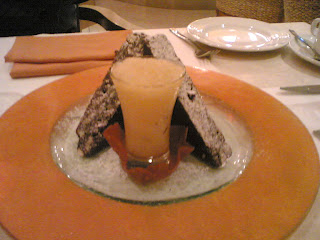 Back at the coffee shop we fell for it. Bet you've never had 'chilli lime sorbet with fudge brownies'. Well, I can tell you now that both items are scrumptious (but each on its own, not together!).

Even more delicious are the little quotes like 'Love and scandal are the best sweeteners of tea..." Peppered all over the menu! 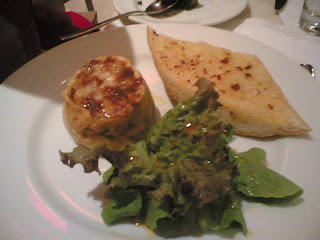 But getting back to the food. My daughter spotted the word 'pizza' and suddenly felt extremely hungry. We ordered. For 425 bucks we were presented with a 'cupizza' (pizza in a cup). More like a quiche impersonating the great Italian masterpiece. Along with it came a thick slice of garlic bread and some ... leaves. Not salad, the random kind chewed on by cows.

On the positive side, the ambience is pleasant. Much classier than anything else in these parts. But the place appears a little cramped. The 'lobby'is non existent, even the driveway is congested. I haven't actually been to other 'Park' properties but am sure they are far superior.

Apparently, this is a renovation of an existing property. So maybe there were some design/ space constraints. I would think, however, that turning 'Apeejay House' near Churchgate into a hotel would make far more sense.

I just don't get the logic of starting a designer hotel in the middle of nowhere. CBD is 'central' in terms of being located between Bombay and Pune. No way is it a '40 minute drive from the domestic airport'. You'd be lucky to reach in 1 hour 40 minutes!

I'm just not sure there are enough fancy businessmen with interests in JNPT and Thane-Belapur industrial belt to patronise this hotel. And even if they exist would they want to stay in this lonely wasteland? As for the Vashi-Nerul crowd, I think the hotel is too exotic and high-end for the aam New Bombayite. And too far as well. 'Tunga' coming up right next to Centre One will do fine for the majority, thank you.

The only silver lining for the 'Park' is a new Chinese restaurant slated to open soon and I will check that out (there is no decent Chinese around here, since 'Yufan' shut down).

As we leave, a lone Chinese (businessman?) is sitting on the beige silk sofa near the entrance. Is he wondering, 'for what I paying thees US $ 150?'