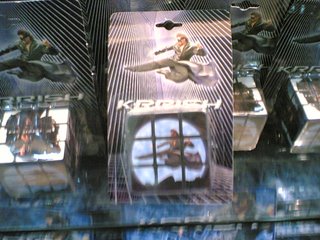 For the first time in film history, we are seeing a cultural clash of epic proportions. 'Krrish' - the Indian superhero hit theatres today. Superman - the 'imported' superhero hits screens next week.

And the battle is not just at the box office. It's a merchandise war, as well. Krrish dolls, masks, school bags and whatnot have been rolled out, along with the film. Just saw them yesterday at the local mall. 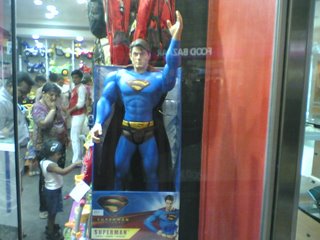 Also on shelves - though in a different shop - were Super man action figures and allied merchandise.

Both are 'made in China' - the Superman stuff is a little classier but Krrish merchandise more affordable. You can buy 'official' Krrish toys for as low as Rs 99. Now if Krrish is a hit - which I think it will be - you can be sure, the stuff will sell. It will sell a lot. I can already picture pester power at work in my home!

Mummy, mujhe chahiye!
Indian movie makers have tried merchandising but never with so much conviction. We saw Kareena's wardrobe from Main Prem ki Deewani hoon retailing at Pantaloons (which flopped as badly as the film!). We saw the Hum Tum characters on bags and pencil boxes but that was grey market ka maal.

Now, Yashraj is making a tentative foray into merchandising with items like a 'trendy ceramic mug' sporting autographed pics of Aamir and Kajol. And a Fanaa 'mirchi' pendant. But sorry, I don't see things like that selling like hotcakes.

The most successful merchandising is a child-centric and unfortunately the average Bollywood film is not. Krrish may get panned by critics or laughed at by teens (if the s/fx don't live upto expectation!). But kids will watch it. And they will think Hrithik is cool because they have no historical superman-spiderman baggage.

Kids are a unique franchise Hrithik has created with his squeaky clean image, dancing abilities and of course 'Koi Mil Gaya'. A film which was more than inspired by Steven Spielberg's E.T. but won your heart anyways. Will Krrish live up to that legacy?

Well, I have yet to see the film but its makers get a 9 out of 10 from me for a very well orchestrated marketing effort.

I mean they've even got the Singapore Tourism Board promoting their city to fans who wish to see 'shooting kahan hui'. That's what I call globalisation!

The icing on the cake would be a sequel to Krrish, where Superman makes a guest appearance :)

pics: from my camera phone, at Center One mall, Vashi

Update: Just noticed Business Standard has covered the Krrish merchandising effort. You can read their take on it here
Posted by Rashmi Bansal at 4:58:00 PM