"Anything for you, Ma'am?" No thanks! 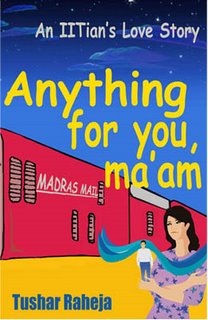 IIT may be the best thing invented in India since Punjabi malai paneer. And IITians the yummiest graduate students on the planet. They might be scrumptious partners at venture funded nanotech firms. Even finger lickin' good investment bankers.

But they should stop writing books. Especially books about IIT and IITians.

I mean granted, Chetan Bhagat pulled it off. But he was the first - there was novelty. More of the same starts tasting like a samosa made from yesterday's bhaji, fried in utra hua tel.

Besides, Chetan Bhagat may not have had too much style but his characters were well defined. As were their conflicts. The plot of 'Five Point Someone' was a bit far fetched, but not completely unbelievable.

The description of hostel life - and IIT in general - was well-sketched. And the idea of a guy who made it to such an institute and still felt like a 'loser' touched a chord with a whole lot of junta.

OK, to get to the point: 'Anything for you, ma'am' is a book written by Tushar Raheja, a 4th year B Tech student of IIT Delhi. The book is sub titled:"An IITians Love story" and that's all that occupies our hero Tejas Narula for 274 pages. How to somehow bunk the annual Industrial Tour and sneak off to meet his lady love in Chennai.

October this year
It was a typical October afternoon. I like this month the most. There's a cool breeze all over the place.

Yes, this is how it starts. And this is one of the deepest moments of the book..

I was speechless, again. She was right after all. If it was fun I was looking for, I better do that. But what am I looking for exactly, I thought. And the answer came to me in no time. A nice girl who loves me. I knew that. I mean I could never be happy with superficial relations with cheap girls.

Ah, I wonder if this is something of an IIT credo or more a case of sour grapes :) I mean jab ladkiyon ke upar line maarne ke mauke hi itne kam milte hain, given the sex ratio on campus, it's not hard to take the high moral ground.

On the other hand, I guess the author himself is so young.. maybe he didn't want to get into trouble at his own home, by suggesting otherwise!

I do wish I could offer some words of kind encouragement but the strange, self important style, non-existent plot, and string of crappy coincidences in the last 20 pages leave no room for that.

Truth be told, I rapidly skipped through to the end after about 75 pages. Really sloppy editing (assuming there was an editor in the first place!)

OK - one positive though irrelevant point. The idea of an attached bookmark, sponsored by Career Launcher was a nice 'marketing' touch.

Well, more than Tushar I'd say his publishers are to blame. Thinking 'Five Point Someone' bika, toh yeh bhi chal jayega they went ahed and released the book. As if there is a new market called "IIT-lit" at the price point of Rs 100.

Sorry Tushar - I am sure you will be excellent at all the regular IIT things. And your book may be bad but we forgive you coz you obviously wrote it yourself. Unlike you know who...!

P.S. Amazingly, Anything for You.. got a glowing review in the Hindu where gasp! it is described as "one of the funniest books in recent times". And compared to the 'breezy style' of P G Wodehouse.

Wonder if we both read the same book!

Methinks the bhoot of P G Wodehouse may now start roaming through IITs, to scare away any other potential authors on campus... Now there's a silly idea for the next edition of the Darna Mana hai series from RGV!
Posted by Rashmi Bansal at 4:53:00 PM