Why do I love this author?

Po Bronson is an amazing writer.

'What should I do with my life' had a seminal influence on mine. I happened to read it at a time when I too was asking that question. And it helped me realise the path I had chosen for myself was the right one after all.

Yes, starting JAM magazine had been the original dream. But somewhere along the way - caught up in the grind of running a magazine - I had stopped writing. And with that something inside me died.

'What should I do with my life' rekindled the chahat to write inside me. Besides the book, here's something Bronson wrote on his website titled "Advice on writing":

It takes an average of ten years dedication before you can make a living writing creatively full time. Even those who succeed early are often rewarded with praise too early, trapping them in a yet-to-mature phase as they attempt to repeat their success. It all evens out over time.

Finding a way to allow yourself the time, to buy time as you mature into your writing, is the biggest "how to".

That rang so true! I started freelancing when I was in college, had 100 published articles to my credit before I graduated - in every publication of the day from TOI to Sunday Oberver to Femina. I continued to write during my MBA, then on my first job (where else - Bennett Coleman & Co).

Nothing I wrote sounded right to me. So I didn't.

To cut a long story short, I did find the courage to start writing again. And more importantly, the 'voice'. By voice I mean the confidence to let the sentences flow from somewhere inside me without agonising over every word. Without comparing myself to anyone else or their style of writing. Just being myself.

But a more tempered, sensitised and reasoned self than the younger me.

Here's what Bronson has to say once again which every writer must internalise:

And here's another bit of advice I like:
Don't work up to your observations - don't save them for the last word. Start with them. Put your very best stuff first, and then force yourself to grow and synthesize and come up with more, more stuff to rival your best.

Here's one of the first pieces I wrote after I got into writer mode:

Both these articles quote from Bronson's book and this one I like in particular:

Individual success will not be attained by migrating to a particular 'hot' industry, or by adopting a particular career guiding mantra?

Instead, the individuals that thrive will do so because they focussed on the question of who they really are, and from that they found work that they truly love, and in so doing unleashed a productive and creative power they never imagined.

This is one of the arresting thoughts in the book I underlined with a pink marker. And it may sound strange but once in a few months I glance through the underlined paras of the book. And it inspires me, every time!

So there, this is the fan mail I should have written long ago but never got around to. 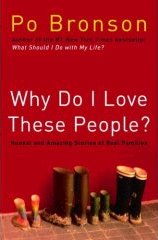 And as a fan I will definitely be picking up his new book 'Why do I love these people'? A book Bronson himself describes as "another in my unique style of social documentary, using incredibly real stories from ordinary people surviving the challenges of their family".

In short, a subject that could degenerate into a 'Chicken Soup for the Soul'. But, with Bronson writing you know he'll manage to carve out a 'big picture'. And yet make these ordinary people and their dilemmas come alive in a manner that makes you go "I know exactly what he's talking about".

Will let you know in case the book falls below expectation - am pretty sure it won't. Magar kya ummeed se dugni hai? Gimme a week's time to find out!

P.S Also read the amazing: Nudist on the Late shift by Po Bronson. Especially if you work in an IT company!
Posted by Rashmi Bansal at 12:58:00 AM