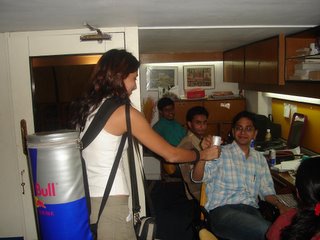 On a regular sleepy afternoon, two sassy young women barge into the JAM office and offer us free cans of 'Red Bull'.

These cans are taken out of cute little silver and blue backpacks along with the crisp instruction: "Don't share the can".

But, uh, why exactly is what you generally think of as a 'club drink' being sampled in offices in the daytime? Let me take a guess. The club market is rather small so someone in marketing decided to 'expand occassions of use'.

"Office workers feel sleepy by mid-afternoon. Let's offer them an alternative to coffee!"

Next brainwave: let's get some cool-looking people to promote the idea and make our already cool drink appear cooler. And let's do other cool things like give these folks a cool n fancy name - 'mobile energisers'.

So far so good but the uncool truth is the can costs 75 bucks. And it tasted horrible to me. Like concentrated kala khatta, except this smelt far worse.

Of course, this is a purely personal opinion - although there are others whose tastebuds seem to share it. Reviews here and here.

However 2 billion cans were guzzled worldwide last year, so there are obviously people who feel differently!

As the Las Vegas Review Journal noted: BusinessWeek reported this summer that Red Bull earned a D+ in a taste test by BevNet.com... After a diplomatic pause, Andre Teixeira, manager of rumjungle at Mandalay Bay, said of the flavor: "It's definitely one of those you have to acquire."

That may be part of the attraction :)


'The drink with wings'
The real USP of Red Bull is that it is supposed to energise or give a 'kick'. Every 250 ml can contains 3 times the caffeine in a cola but less than what you might have in a cup of instant coffee (60-100 mg per cup) or freshly ground coffee (80-350 mg per cup)

Besides caffeine, the label on the can says the drink contains vitamins, a carbohydrate (glucuronolactone), an amino acid (taurine), and about five teaspoons of sugar. When Canadian Broadcasting Corporation (CBC) asked a laboratory to analyse the drink it found 1000 mg of taurine and 600 mg of glucuronolactone - a naturally occurring substance manufactured by the human body.

Both taurine and glucuronolactone are supposed to detoxify the body.

It's the combination of all these ingredients that gives the Red Bull 'kick' (can't vouch for that - because I gave up after 3 sips!). However it is for that very reason that France, Denmark and Norway have banned sale of the drink.

CBC reported in February 2005 that French nutritionist Isabelle Vanrullen, who works with the country’s food safety agency, says France banned the brew because of how the ingredients in Red Bull interact: “There are various side effects for each one of these three substances, which vary in degrees of severity. And they can also interact with each other.”

The other concern is that unlike energy drinks like Gatorade, Red Bull dehydrates the body. So you shouldn't drink it to replenish your body after strenuous exercise.

Also, it tastes good as a mixer with vodka but there were some concerns when two apparently healthy young people died in 2001 . But although they had consumed Red Bull mixed with vodka no evidence could be found about Red Bull causing those deaths. In any case that was 4 years ago and there have been no adverse reports since.

Personally, I don't see Red Bull a a 'health' issue. Like it? Drink it. I still think it would taste a lot better in a smoky, dimly lit club, with 1000 watts of music - than in front of the office computer.
Posted by Rashmi Bansal at 7:29:00 PM