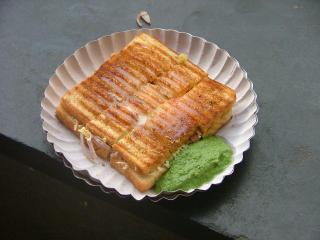 In countries where order and sanity prevails, young people get their dose of thrills by bungee jumping and mountain biking. In India, the most popular - and easily accessible - adventure a young person can seek out is street food.

Yes, even as Macs, Domninos and Subways sprout up everywhere, the Kailash Parbats and Brijwasis expand their reach and completely new outlets like 'Wraps n Rolls' enter our food courts, street food continues to flourish. Especially in a city like Mumbai.

If anything, there's more of it now than there used to be. And it's also cooler to eat off the streets than to be a sissy and say, "Sorry I don't have that stuff".

I used to be that kind of person - it was the way we were brought up. Carry tiffin with you, eat at a place with a table, if you really must.

Even on the annual trips to Juhu beach when hicktown cousins came a-visiting, we'd drag along a picnic basket full of aloo-puri. The max you were allowed to buy at the beach was a bhutta.

Though I am now 'converted', the fear still lingers... However I see no such inhibitions with the majority of the college junta of today!

Khaate raho
Why is street food so popular? Well I guess because of two factors:
a) It's cheap and it's everywhere: If you can whip up a decent bhelpuri rest assured you will make a living in Mumbai city. Even after paying off the BMC and cops for standing under a tree somewhere.

And you can sell your bhel for 7 bucks vs the 15 rupees it will cost in an Udipi, or 20 bucks in a mall.

Besides, the 'wallahs' are at every street corner and outside every college. Just seeing the little crowd of people standing there waiting for their food fix makes you hungry!

b) It's unique: Unlike the mass produced mastication material churned out by chains and even Udipi restaurants, street food vendors often have the X factor.

And those that do become 'famous' for particular concoctions. Like the dosawallah outside Sophia college, the sandwichwallah outside National college and so on and so forth.

The famous guys actually command pretty good prices. I'd like to visit their homes and check out what cars they drive!

Dirty secrets
Coming back to the adventure bit. Well, 99% of this street food is made and served in the most unhygienic and filthy conditions. Guess it gets that raw and edgy 'flavour' partly from E coli.

The trick to eating street food is to never stare too closely at the vendor's grimy nails or the water in which the plates are washed.

JAM magazine once did a story on the 'dirtiest secrets' in street food and guess what. There are some big time bhel wallahs who mash potatos with their knees...

And yet, people who eat this food are not dropping like flies. Of course, at any given time there are hepatitis and amoebiosis cases going around but on the whole, the regulars seem to have developed an acceptable level of immunity.

From time to time - like during the jaundice epidemic last year - the BMC will come out with 'rules'. For example, all vendors were asked to wear plastic gloves. And no cooking per se was to be allowed - only assembly of food such as sandwiches, bhel etc.

But neither rule is being followed. Chinese carts are still around. And the gloves were quickly discarded because
a) No one came to fine those who didn't wear 'em
b) Customers didn't seem to care either!

The future of street food
I think street food is definitely something which is desirable. All of south east Asia and even a country as advanced as Japan is fond of its street food.

The FAO (Food and Agriculture Organisation) is working with local governments to upgrade street food standards. Visit Bangkok - a country not all that ahead of India - and the hygiene levels are amazing. Didn't just happen by magic though - it took effort . The problems were very similar, but they've been successfully tackled.

But it seems to me that changing attitudes will be difficult as long as the majority of vendors live in pretty miserable housing and sanitation conditions. When hygiene isn't a part of their lives anyways - how can it be reflected in their food?