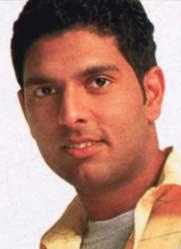 Forget the debate about what constitutes news... I couldn't even figure out what new look. It just seemed like a stylist had ruffled her fingers through his hair.

And yet, 3 whole minutes - or maybe more - was spent discussing it. And what Yuvraj likes to wear. And which cricketers he thinks dress well. And so and so forth.

It's great that our news channels have moved beyond covering politicians. So every time Mayawati sneezes she does not make headlines. But the channels have not figured out what to air as a replacement, and this problem is especially acute with the 'mass' or Hindi news networks.

This is actually phase 3 in the television news shift.

In the DD era, news used to be autocratic. Salma Sultan, with a rose in her hair, read out details of the PM's daily schedule - cutting ribbons, launching books, being received at the airport.

In the Aaj Tak era, the coverage became more democratic - politicians of every hue got their mugs on air.

In the Too-Many-Channels-To-Count era - dumbocracy rules. Channel heads realised no one really cares about netalog's antics. So given that there is no earthquake, plane crash or terrorist bombing, you gotta load up on 'human interest' stories.

Now what constitutes interest, and to which humans is the question. For example, a couple of weeks ago, Zee News ran a detailed segment on how the planetary alignment of Rahu, Ketu and Shani is expected to impact inflation (I am not kidding!).

This was followed by a segment on how petrol pumps in Delhi are giving out saplings to car owners in Delhi in a bid to encourage planting of trees. One sapling for every litre of petrol filled. A noble but ludicrous scheme - but one which got covered as 'news'.

And there lies the crux of the matter. These are really what newspapers publish under 'features' - except there is no such classification in broadcast. So everything - from the earth-shattering to the inane is lumped into one big basket.

Why am I watching this channels, anyways, you might ask? Well, I'm not. But given that surfing constitutes 90% of TV viewing for many of us, you absorb bits of their coverage by default. The answer is to flick the button and move on...

So, dumb down all you will, for all I care. But please, Yuvraj, the next time you want a 'new look' get a real hairstylist. Borrow Aamir Khan's.
Posted by Rashmi Bansal at 2:01:00 PM