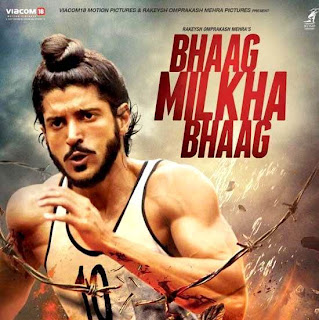 To make a film about a champion who narrowly lost the biggest race of his life is a monumental challenge. Nobody wants to watch a man put in his very best and yet fail, on a giant multiplex screen.

That is the genius of director Rakeysh Mehra and scriptwriter Prasoon Joshi. The film starts with the Rome Olympics – a race we know Milkha Singh lost. A fact we cannot change. Yet, ‘Bhaag Milkha Bhaag’ moves you, entertains and elevates you. You emerge from the theatre feeling good, feeling that winning is really really important but it’s not everything.

Rakeysh Mehra decided to make this film not just because Milkha Singh was an outstanding athelete. But because of his undying spirit.

“This boy, who came from a village and was an orphan at 11, actually witnessed the massacre of his family members, including his brothers and sisters. He picked a knife to survive at 11. He spent time in (Delhi’s) Tihar Jail before he joined the army. He wanted respect and to be a human being against all odds. That’s what a wonderful human being he is, and that’s what got me into the movie, not the records he made.”

And that’s what makes ‘Bhaag Milka Bhaag’ special. It’s the story of a man, not Superman. He is vulnerable and he is flawed, like us all. He did not have a ‘vision’ for himself – at the very start. He didn’t even know what he was capable of.

Why does a man run, anyway? When trials were being held, Jawan Milkha Singh ran for an extra glass of milk. When he went for the Brigade Games, he ran to earn a navy-blue ‘India’ blazer. After failing at the Melbourne Olympics, he ran to regain self-respect.

At the Rome Olympics, he ran carrying the hopes of all of India, on his slim shoulders. Perhaps that burden was too heavy. The film doesn’t go deep into this aspect except to allude to personal demons from the time of Partition.

A man can run into the future, or he can run from his past. ‘Bhaag Milkha Bhaag’ – just three words but two different meanings, depending which track or which field you are standing on.

In the film Milkha’s coach says to him, “A sportsman’s life is about discipline and tapasya.” That’s equally true of the efforts put in by Farhan Akhtar in this film. He plays Milkha Singh to perfection, right down to running stance. To get that athletic body language, the actor trained with sprint coach Melwin Crasto and physical trainer Samir Jaura on the racetracks at St Stanislaus High School in Bandra for 13 months.

“When I decided I would do this role, I promised him that I would do whatever it takes for this role.”

It’s a whole bunch of people working in this spirit, that make the film what it is. I must mention the child actor Jabtej Singh who is outstanding as the young Milkha Singh. And the rousing ‘Zinda hai toh’ sung by Siddharth Mahadevan, which is completely in sync with the spirit of the film.

Critics are saying the movie is too long, has unnecessary songs and too many cinematic liberties. But I don’t agree. A work of art is not meant to be ‘perfect’. If it’s powerful, it carries you beyond the logical mind into a parallel universe. And lingers on afterward.

‘Bhaag Milkha Bhaag’ gets 4.5 star from me, for doing just that.

The bonus is that it will inspire a few kids out there to dream big and run the race of life with more vigour and confidence.