Smoke, drink and be marry 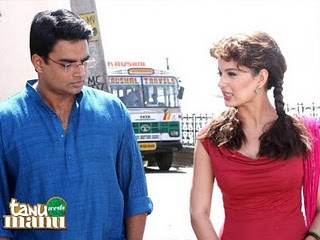 I saw 'Tanu weds Manu' a couple of days ago. A fairly timepass tale of a Kanpur ki kudi and London ka laayak doctor.

Am sure whoever wanted to see the film in the theatre has done so by now, so I am going to freely spill all the beans. (Not that the title leaves any doubt about the eventual outcome of the phillum).

The crux of the issue is that Tanuja Trivedi (or Tanu) is a not-so-typical girl from Kanpur. She is a rebel, but one without a cause apart from 'ma-baap ki pasand ke ladke se shaadi nahin karoongi'.

There's also the unsuitable boy whose name Tanu has tattooed on her chest and wants to run away into kachori country with. More for 'bhaag kar shaadi karne ki thrill' than love, lust or any other motive fathomable to regular human beings.

My point is this: If Tanu really was such a rebel what was she doing sitting at home, waiting for boys to be paraded in front of her? If Tanu was really a kudi 'jo kisi ke baap se bhi nahin darti' she would not counting on a dose of sleeping pills to scare away potential suitors.

She would be making use of her Delhi University education to stay independently, far from home. Immune to parental plots. Able to say "I will marry... someday... and if I need your help to make it happen I'll let you know!"

Which is what Manu seems to be doing - ek to mummy peechhe padi hain aur doosra nerdboy has no lovelife to speak of. Although he is loath to admit it and justifies the ritual of 'seeing girls' by saying: "Shaadi bhi to ek kaam hai, kar hi lete hain."

One interesting point is how Manu hardly cares about Tanu's 'character'. or lack of it, in the traditional sense. Unlike the ancient Indian predilection for innocent, virgin pina coladas.

But will he be as flexible, accomodating and unlike-most-Indian-men after marriage, as he appears to be before? That is the million pound question, a gamble Tanu is taking.

So this is a movie and it has to follow its course but what of real life Tanus and Manus?

The bottomline is this: If you truly want to live your life on a non-traditional template you have to make tough choices. Big choices. Create your own identity.

Stand by your own values and convictions (even if they aren't shared by the world at large).

If you want something more, something different from life don't get trapped in the small stuff - like smoking, drinking, changing boyfriends.

Experimentation is good, but only to help you arrive at personal guiding principles.
Posted by Rashmi Bansal at 12:22:00 PM