iSay, you say, we all say, to Nokia

I used to think I would never use a phone other than Nokia.

The little grey number was easy to use, felt great in the hand and featured the original version of snake with the long pixels chasing the single-pixel.

Three years later I graduated to the Nokia 6670 - the main attraction was its one megapixel camera. Using the Symbian OS was quite a pain (and prompted me to write an article titled 'Too dumb for a smartphone' at the time).

But eventually, used-to ho gaye, and the silver brick became part of me.

Three and a half years later, in the summer of 2008, I finally retired the 6670 due to extreme old-age issues. I bought another Nokia - this time an N82.

I wasn't happy about it for multiple reasons: it was too bulky, too ugly, had no choice of colour (there was silver - which would look exactly like the one I had used for 3 years and black, which I opted for though it wasn't much of an option).

This phone, sadly, served me for just about 18 months before the keypad conked out. After two cycles of repair I decided it was too much of a bother - kya karein ab?

Well, God heard my prayers as suddenly I received a gift.

"You tell me: iPhone or Blackberry?"

Well, it was a no-brainer for me and today I am the proud owner of an iPhone 3GS.

I'm sorry, but I simply do not see myself using a Nokia - again. 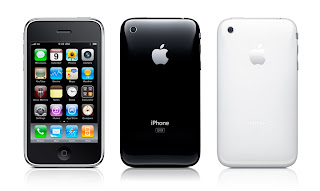 Life has changed after the iPhone in many small ways. The first two weeks I was paranoid about losing it, dropping it or scratching it. Now the iPhone's grown on me and feels safe in my hands.

For the first time in years I actually play games. The iPhone games are way cooler than anything I ever saw on Nokia. My current favourites include Paper Toss, Monkey and Fall Down. All absolutely free, on iStore.

And oh, Bubble Wrap - there is a special childish pleasure in popping the bubbles on the screen with your finger, as opposed to using up and down keys, to do the same.

The second great thing is I purged my mailbox of at least 2 dozen mailers I barely ever read. The reason I did this is data plans on iPhone are expensive and I don't want to pay for mbs and gbs of PR mail and random news from here and there.

In the process, I've reduced email stress on myself - considerably.

Using iPhone as a wireless device is also simply great. Esp now that wireless is available in more and more places (home, office, some public places). That should only get better.

Typing messages on the iPhone - took a little getting used to, but easy enough.

My one grouse is the camera. I think the N82 took far better pictures and in 5 megapixels. So I keep the N82 in my purse - and use it as a camera :)

Poor Nokia, things are not looking too good for them. Businessweek magazine reports: lacking a hit handset in the smartphone category, its profit margins are falling.

And in India, there are too few Apple users to even blame (thanks to the pricing). Go to any shop selling phones and people are walking in and asking for handsets like LG Icecream and Samsung Corby by name.

Nokia's number series has become so very confusing - it's perhaps time they gave some of those phones a naamkaran. And made it easier for us all.

Nokia is still a market leader in the lower end handsets. But there too companies like Micromax are coming in aggressively with high end features at very competitive rates.

It's time for Nokia to go back into the laboratory and come up with something that make you want to chuck what you have and buy a new one. Imagine a stunningly good-looking girl with an IQ of 180 - but in the form of a phone.

I don't know what it could be. Maybe a jellyphone which takes the shape of your hand. Maybe the slimmest phone in the world. Maybe an indestructible phone, a handset which will not break - no matter what.

Just a few crazy ideas. I am sure there are designers and engineers out there can come up with much better.

Because product lifecycles are getting shorter and shorter. If you're not dreaming 'what next', 'what more', your brand is one step closer to the grave.

Nokia still enjoys tremendous goodwill, and marketshare. But it needs some stardust to sprinkle on consumers. To work its magic spell, to mesmerise us into saying "lena to Nokia hi hai, question is 'which model'!"
Posted by Rashmi Bansal at 2:20:00 PM