The wonder of Ellora 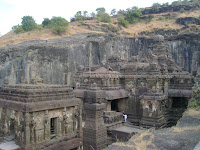 This is a panoramic view of the Kailasa temple at Ellora. To take this picture you have to climb up a pagdandi and huff and puff your way up - not many visitors do. But the effort is worth it.

And all I could think, from up there, was wow! Which ancient genuises whittled down an entire mountain to create this... and how?? Much is said and written about the pyramids and the Taj Mahal. Those are amazing feats in engineering and architecture but at the end of the day they were built bottom up.

Which is difficult but not impossible.

How do you humble a mountain into submission with a mere hammer and chisel? Even if you have several hundred years at your disposal?? "Shayad unke paas chemicals thhe... to loosen the stone," was the explanation from one local. Phir bhi. 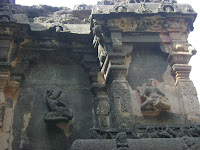 And all said and done, we've heard of Ajanta-Ellora but they just haven't got the hype they deserve. The Kailasa temple is a 'world heritage site' but how many of us living in Mumbai have visited it? Or plan to, in the near future? I for one experienced it for the very first time a couple of days ago. And not because I had planned a trip as a tourist.

Kuch aur kaam se gaye thhe - khaali time mila so sightseeing par nikal gaye. And I simply couldn't believe my ignorance. I mean I vaguely knew Ajanta mein paintings hain, but had little clue about Ellora. Maybe we read it in our history textbooks but I had long forgotten the details.

Despite it being December - peak season for tourism - there were not that many visitors. Among foreigners, mainly Japanese, all with guides and taking the tour in the most systematic way possible. 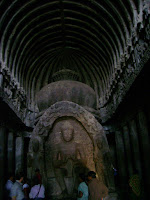 The Indians generally wandered from one cave to the next (there are 34 in all - Buddhist, Hindu and Jain). None of them had guides (the standard rate being a steep Rs 450 as against an entry ticket of Rs 10). And of course, the ASI or government or whoever is responsible has not bothered to even put up signs outside the caves, explaining their significance. "Ek number (first cave) par board laga hai... uske baad pata nahin, baaki chhod diya," shrugged one of the 'caretakers'.

These are the guys who take care to switch on a flashlight and point out sculptures to foreign tourists so they can take snapshots with fancy cameras, flash et al. Which is explicitly prohibited!

The one thing I must commend ASI or whoever is in charge for is the fact that the caves are very clean. No garbage lying around, no paan stains, no urine ki smell. I guess we Indians are pious but certainly vigilance also plays a role. 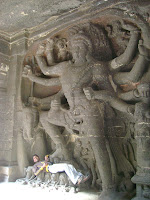 Speaking of Indian tourists sights like this one really pained me. This guy was typical of the bhartiya sightseeing party. The kind who go from cave to cave amusing themselves with how much 'echo' they could generate. There was a huge bunch of schoolkids also doing the same thing but you can forgive the bachchas. The glee of bunking school for 'picnic' is something we've all experienced. Although I am sure if someone took the trouble of bringing history alive for those kids, they would be most receptive.

Then again, it's the overall chalta hai attitude we have towards our own culture. And I am no one to point fingers. Just that I was overawed, not just by the sight but the energy that vibrates at this place. The ancient wisdom that went into its creation. And the devotion to a divine power which made it possible

I will be back one of these days (there was no time to visit Ajanta!) and I hope you guys put this on your must-see list as well. Wonder if National Geographic or Discovery have made a documentary feature on Ajanta-Ellora... would love to see it. 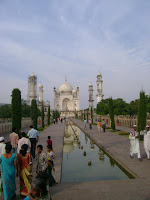 And finally, no piece about the attractions in and around Aurangabad would be complete without a mention of the 'non-attraction' - 'Bibi ka Maqbara' also known as the poor man's Taj Mahal. Built by Prince Azam Shah, son of Emperor Aurangzeb, in the late 17th century as a loving tribute to his mother.

It has none of the grandeur or the romance of the Taj. It's a soulless, bonsai version of the original - a futile and boring me-too!
Posted by Rashmi Bansal at 11:56:00 AM