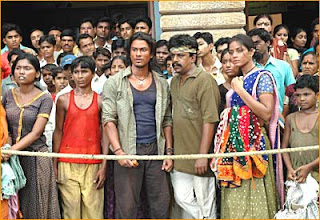 I know, this film released 10 days ago but I want to write about it because I think it got more than one nasty review.

However, I think it is far better than a lot of trash churned out of Bollywood. Of course, it's not the kind of film you go to watch if you're in the mood for candyfloss. The Madhur Bhandarkar style of film-making is like the wada-pav on Mumbai's streets. It's gritty, it's real and can occassionally churn the stomach.

Admittedly, we're kind of used to his 'peep-into-my-world' formula. So the novelty angle has worn off. 'Chandni Bar' hit you straight in the gut. And 'Page 3' was a great follow up effort - at the opposite end of the social spectrum.

Corporate was a let down, to be honest. With Traffic Signal though, Madhur is back to what he does best. Weaving a tapestry of characters and situations from real life into an engaging feature-length film.

In a nutshell, this is the story of a motley bunch of people who make their living at your average Mumbai traffic signal. The beggars, hijras, gajra-sellers and the 'Midday le lo, Midday' urchins. Of course, it's all a 'business' at the end of the day. Every one doing dhandha at the signal pays hafta, which eventually reaches a 'bhai'.

Silsila (played by Kunal Khemu) is the cog in the wheel who collects the hafta from this particular signal. Yes, there isn't much of a 'story' except towards the end when there is a plot involving a flyover, builder-politician nexus and an engineer getting killed in the process.

But even as a collection of mini-vignettes the film retains your interest. There is little Chinnaswamy Vedgiri whose family has perished in the tsunami. He calls up the relief office week after week via STD to ask 'kuch pata chala kya?'. The answer is inevitably "no", but he just does not lose hope.

Another of the street kids invests his hard earned money in a fairness cream called 'Fair fast' which promised to make you 'gora' in 4 weeks. You know the disappointment in store and fully empathise when he hurls stones at a hoarding of the product towards the end of the film..

Then there's drug addict Dominic (Ranvir Shorey) who poses as a 'software engineer' who came to Bombay for a job but had his pocket picked. "This is very embarassing... but can you give me 50 rupees to go home?" he asks with such decency and genuineness that people can't help but falling for it.

Just like the little old lady in Colaba Causeway - a Parsi to boot - who begs in a similar fashion. Kunal Khemu as 'Silsila' is outstanding. Neetu Chandra as his love interest is adequate. Sudhir Mishra (the director) is cast as a bhai and he certainly looks the part :) But everyone, from the paanwalla to the mausi with a minor part is excellent. The lack of star cast is wise, it would have completely ruined the film.

The ending is not a 'happy' one. But it's a little more hope-filled than some of his previous endings. And so is the overall tone of the film.

'Traffic Signal' basically brings out the idea that every human being is a thinking, feeling person. No matter how 'low' they may have fallen.

So Noorie (a prostitute played by Konkona Sen Sharma) may sell her body every night but having sex with a corpulent police inspector - on order, not out of choice - is an ordeal.

Dominic, the drug addict, has nothing to live for but he is secretly in love with Noorie. He may con people to support the habit but will insist on paying for the chai they share at the tea-stall.

And everyone, no matter how poor he may be today is dreaming of a bette future. So the guy who comes to marry Silsila's mooh-boli behen proudly declares,"Pehle mandir ke saamne sirf chappal dekhta tha. Ab bahut tarakki kar li hai... Haar-thaali bhi bechta hai".

As in all Madhur films, the little touches are the most memorable. Like the scene where a couple of politicians are haggling with an urchin over the price of the 'flags' commonly sold on Independence Day. A enunuch comes up and says, "Paise main deti hoon" and thrusts the flags into the netalog's hands.

It's quite powerful - the idea that the very people who pledge allegiance to the flag in the interest of 'desh seva' actually respect it the least.

Essentially, Madhur is a keen observer of human nature and human beings. And he must have a very able script and dialogue writer :) The film captures the many nuances of life on the street. Yes, it occassionally goes a bit overboard.

The bit about home loan agents from 'ICBI' bank harassing the bhai on his mobile phone is funny. As bhai remarks,"Police ke paas mera number nahin hai... in log ko kahan se mila?" But actually showing the guys being stripped and beaten up... did not work. It looked more like a personal agenda which Madhurji worked into the film.

Overall, I would recommend you see 'Traffic Signal'. And I for one am looking forward to Madhur's next film.