She came, she smiled, she fainted 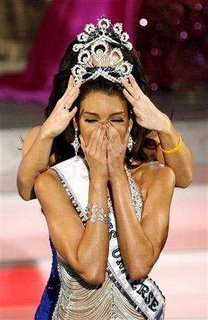 Miss Puerto Rico is crowned Miss Universe 2006. Ten minutes later she faints, because her dress was too tight.

A barrelful of laughs is not the word Donald Trump would like viewers to use to describe the Miss Universe pageant whose franchise he owns. But that’s exactly what it was.

Who watches such shows? Only idiots like me, who tuned in to Star World expecting to see Frasier. Only to discover Miss Universe 2006 was Monday night comedy. Just a slightly different form of it.

Where does one begin? Miss USA’s purple chiffon gown inspired by a wedding cake, perhaps? The poor girl looked like she would fall flat on her face, any moment.

Then there was the compere’s cheery assertion, “One girl’s life will change tonight!” Never mind if no one remembers the name of last year’s winner…

But, as expected, the question answer round provided the most laughs. Miss Japan is asked, “Which event in world history would you like to change?”. She confidently declares: “Men and women are the same… except men have more physical strength”…

Yeah, so she didn’t answer the question but obviously that does not matter. The girl with the best cosmetic dentist and clingiest outfit won the crown. When asked to define ‘success’ she rattled off a 5 sentence long answer in Spanish which, translated into English means “Gimme that crown, buster!” 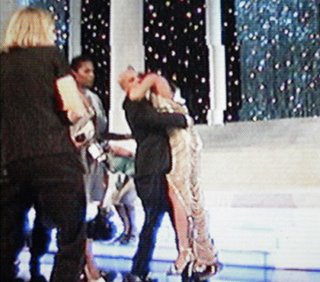 Miss Japan – the historically challenged young lady – merely came in second. And Miss Puerto Rico did faint. I’m not making that up! There she is, getting carried away...

"She got dizzy. It's very hot up here. Her dress is tight - as you could see it was beaded and heavy," explained the organisers. She's had 'plenty to eat today' they further clarified...

Perhaps that accounts for the tightness of the dress! :)

The politics of the crown
This year, in a desperate attempt to revive the popularity of the pageant, the contest was held in Los Angeles’ Shrine Auditorium. The same venue as the coveted Oscars.

As we all know where the contest is held has a lot to do with who wins it. Ideally, Miss USA would have won – but that would have appeared too blatant. So she merely makes it to the top 5. Miss Puerto Rico is a fine substitute. Short of official recognition as a state, it is United States territory.

But Puerto Rico is ‘Latin’ enough to satisfy the Hispanic and South American audience as well. Two birds killed with one stone!

It’s no coincidence that Miss Japan won 1st runner up and Miss Switzerland came in third. The signal, clearly, is to give the pageant a ‘First World’ sheen once again.

All those who fret about India not making it – coldly examine the statistics. Miss Universe is more of an American pageant. The 3 countries which have won the maximum number of titles are USA (7), Puerto Rico (5) and Venezuela (3).

Miss World, on the other hand, is a British pageant. The top three on this list are India and Venezuela (5 titles each) and the United Kingdom (4 titles).

The honey is where the money is. I don’t know what Venezuelan mamas mix into their chica’s Farex but for the other girls, clearly nationality does play a role in tipping the scales.

I’m sure Steven Levitt of Freakonomics fame will one day oblige with a more detailed analysis! And one day, we may even have a Miss Universe contestant write a racy book on what really happens behind the scenes at such pageants.

But the good news is, we have a Miss India contestant who’s done that already! Ira Trivedi, a contestant at Miss India 2004 has just published an amusing and altogether convincing account of the madness that goes behind the method in the desi leg of the pageant.

The book is called "What would you do to save the world?" Title accha hai na? The book's no masterpiece but a good read for sure.

Just finished it yesterday, which is one of the excuses I have for pausing to actually watch the Miss Universe pageant. I feel like an insider, now that I am familiar with terms such as 'quarter smiles', 'half smiles' and 'full smiles'. Not to mention the joys of 'stick-on bras'...

A separate post is required to do justice - and one shall shortly follow!
Posted by Rashmi Bansal at 11:55:00 PM