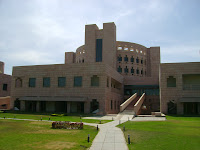 ISB Hyderabad has been ranked # 20 among top 100 bschools in the world by the Financial Times.

Naturally, ISB students and alumni are elated while all iim egroups have been buzzing since the news broke last night with the question: "Why are we missing??"

Before I answer that question let me put down a few things about the ISB campus which impressed me when I visited it last month:

a) A high degree of enthusiasm, efficiency and commitment among the faculty and the administration. At IIMs you notice these traits among individuals, not the institute as a whole.

b) Impeccable and international standards in terms of infrastructure and maintenance. Everything is shiny, new and working!

I have already mentioned what I thought of IIM Calcutta. On a recent visit to IIM A I took a quick round of the campus and it's in need of a lot of repair and overhaul. 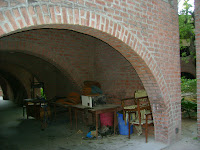 Of course those buildings are 40 years old so wear and tear is inevitable. But what's the excuse for general untidiness? This junk lying underneath my old dorm D5 has been there quite a while. I remember it from my visit a year before! Maybe this kind of thing has no impact on rankings but it reflects a chalta hai attitude and that translates elsewhere...

c) Amazing facilities for the MDP participants. The catering and housekeeping for the MDP centre as well as student housing and cafetarias is handled by Sarovar hotels.

The experience of staying in KLMDC at IIM A by contrast is.. sad. No reason why they cannot outsource the same! PGP students of course can't ask for the same pampering, given the far lower fee structure.

d) The international faculty ISB attracts is mind blowing. I would love to take courses with some of those profs!

Many of the ISB visiting faculty is ex-IIM. Would they be open to teaching for a few weeks at our institute? I am sure they would. But we can never sort our the whole issue of how much to pay, who will pay and most importantly convince the profs on campus this is not an indictment of their abilities. That truly, there is much for both sides to gain from each other!

e) There is a very organised effort on the part of ISB to keep in touch with its alumni, in the way an HBS or Wharton does.

No doubt IIMs also keep in touch but the effort is not spearheaded by full fledged professionals and treated as a revenue centre.

And well, I could go on but coming back to the FT ranking. I say: Well done ISB! I hold the institute in very high regard. The really commendable thing is the speed at which they've got here - it's been just 6 years!

But to get back and answer the original question: where are the IIMs? Let's first take a closer look at the FT ranking.

FT's ranking is based on:
- Weighted salary
- % salary increased before and after MBA
- Employment (% of students who found employment within 3 months of graduating)
- Research

There are other parameters but that's over 50% of the weightage.

Now open this webpage and click on each column. You will find that:

Weighted salary: ISB has the HIGHEST weighted salary among ALL bschools in the world: $169,355. The figure is calculated taking purchasing power parity into account and I surmise it's extrapolated from the average salary which ISB grads got in 2007.

Incidentally, the use of PPP salaries by FT is the main reason why 11 of the top 20 are now from outside the US.

% increase: ISB students got a 129% salary increase after graduating placing them at # 14 on this parameter.

Employment: ISB ranks # 1 on the 'employment' parameter with 100% of its students getting jobs within 3 months of graduating

Research: ISB ranks # 88 our of 100 bschools when it comes to research (calculated as the no of papers faculty published in 40 odd international academic and practicioner journals).

Wonderful. I am not sure if IIMs participated in this exercise at all. But if they were to, let's see how an IIM Ahmedabad would score on all these points
.
- The average Indian salary @ IIM A in 2007 was Rs 13.6 lakhs. Using the ISB formula (their average domestic salary was Rs 15 lakhs in 2007), the PPP weighted salary of IIM A grads translates into around $154,627.

And so on. IIMs would rank equally high on 'employment' and salary increase, and possibly around the same in research.

It's just that nobody at IIM probably took the trouble to submit the info in the required format... Wonder if we even track data like % increase in salary before and after the MBA!

I feel a sense of deja vu, because I noted this exactly 2 years ago, when the Economist rated IIMA # 69 our of 100 bschools. With a more careful submission of data we could have ranked far higher.

The point I am making is not about who's superior. ISB is likely score higher than IIMs in areas like diversity, for example while IIMs will rate higher on the 'value for money' parameter.

It's not about 'winning' or 'losing' but making an honest attempt to compete at the highest level of the game.

The folks at ISB are obviously far more motivated to make the best efforts to score well in ranking exercises, especially by reputed agencies and publications. Whereas the IIMs are full of people who cannot even decide if rankings are important or not.

When we get ranked high, everyone is happy. When we don't, we say rankings don't matter instead of:
a) taking it as constructive criticism
b) examining the fine print in rankings and creating a strategy to improve our performance.

And that sums up the difference between IIMs and the ISB. Why we need to take the FT ranking seriously, whether we believe in rankings or do not.

We need the spirit of private enterprise at the IIMs - the desire to be the best, and be seen as the best. It's a classic case of the 'boiling frog' except the water is not yet so hot that we can't summon all our strength and jump out.

Update: As I was posting this a student @ the IIMA campus tells me the reason we don't feature at all is that we did not meet FT's qualifying criteria. Only bschools accredited by AACSB, Amba or Equis were considered.

IIM A is currently being reviewed by Equis and all I can say is: abhi tak hum kyun so rahe thhe? Well, better late than never. Hope we take it up as a challenge and make it to the top 10 next year!
Posted by Rashmi Bansal at 11:19:00 PM