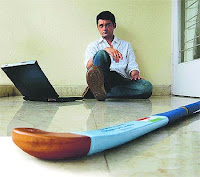 A couple of years ago I wrote a piece titled 'Career lessons from Bunty aur Babli'. It was inspired, not by the film as a whole, but a single piece of dialogue spoken by 'Bunty'.

Now, a leading newspaper wants me to write on 'Career lessons from Chak De India'. I declined. First of all, I haven't seen Chak De India. (Yeah yeah yeah. Did try to, twice, but ticket nahin mila).

But you don't need me to tell you that, do you?

However, there is a career lesson in Chak de India. It doesn't lie in the film, though. The lesson is: Look beyond MBA, Engineering, Journalism. Any career you choose today, you can make a difference.

I'm not talking about taking up women's hockey. Mera ishaara scriptwriter ki ore hai. Jaideep Sahni is the man behind the story, dialogue and lyrics of Chak De India. He's also the guy who wrote Bunty aur Babli, Company and Khosla ka Ghosla. Each a different kind of film, a different kind of challenge.

A recent interview in the Sunday Express brought to life Jaideep's fascinating journey into the world of film.

Jaideep's first job was as an IT consultant with NIIT (one year) and then a stint with Contract Advertising (six years). Scriptwriting? He was introduced to it it by chance.

In the late 90s he stumbled upon John Briley's screenplay of Gandhi in a bookshop. "I was hooked. I read it and thought: it's almost like a computer programme..."

He brgan teaching himeslf the art of scriptwriting by accessing sites of universities abroad which ran scriptwriting courses. The first break came when RGV was looking for a writer for Jungle. Someone recommended his name. He got the job. Company followed.

Aside: Whatever Ramgopal Varma may have degenerated to, today, he must be commended for all the guys he's given a break - when at the height of his career.

That said, the first 'trademark' Jaideep Sahni film was Bunty aur Babli. A film which captured the aspirational spirit of small town India. Which, despite being a comic caper, was oh-so-real. And that's because Jaideep created the sleepy town of Fursatganj from his first hand experience of small town life. Experienced as a territory manager for NIIT in western UP.

Khosla ks Ghosla was similarly born out of a real life land-grab incident in the family. The bits about the mafia erecting a wall around the plot and the Khosla family hiring pehelwans to evict them was true. The rest was fantasy - in real life there was no happy ending.

As for the 'authenticity'- Jaideep actually sent out his team to meet and secretly record conversations with property dealers in Gurgaon.

This Script Writing by Observation is the secret sauce of Sahni's films.

Chak De India was inspired by a single column article in the sports page of a newspaper. But to actually get the flavours seen and enjoyed in the film, Jaideep hung out at national hockey training camps - pretending to be a student writing a PhD thesis.

Sahni's scripts start from a 'subject which catches his attention.'

"Then come the characters, then a kind of story idea starts forming, the character's journey. And from then on it's the craft stuff - screenplay, dialogues, lyrics, all of it."

The interesting thing about Jaideep is that at no point does he say,"I always wanted to write Bollywood films." But he did take different bends in the road which eventually led him there.

Firstly, he quit the engineering-IT way of life pretty early to do 'something creative' - in advertising. I am sure when he made that leap of faith he would have suffered a temporary loss of income (trainee copywriters are never paid as much as IT types!).

When he stumbled upon scriptwriting, he pursued it. And became a student without a 'teacher'. The vast resources of the internet are available to all of us, but how many use them in the way he did?

Then, at some point Jaideep quit advertising to work independently. Apparently his resignation letter was somewhat filmi, it included the line "Do takiye ki naukri mein mera lakhon ka saawan jaaye". Although he hastens to add, they were 'very good years'. Magar all those meetings and stuff were restricting his self expression.

The point is, many of us develop parallel interests along with our regular work life. At some point you may think: "What if I could do this full time. Wouldn't life be a lot more meaningful and fun?" But you hesitate, you think, "Why take a risk?"

Why, because the rewards could be phenomenal. If you are a realist (ie not deluding yourself about your talent !) and yet an optimist (it won't be easy - but so what!), then go ahead. Take the plunge.

Chuck de security and Provident Fund. And you too could Chak de, India.

"Salim-Javed never went to a screenwriting school but still ended up becoming a screenwriting school for all of us. Too much education can kill a perfectly smart brain forever. But it's desirable in terms of craft, in basic things like creative writing classes in every university which most people in the west take for granted.

We spend our childhood dreading our Physics-Chemistry-Math scores and hundreds of entrance exams instead, which is a pity for those who are not so inclined.

- Jaideep Sahni, in an interview to India FM